Our backend developer Marc gives a glimpse to what he actually does at Lamia talking about tools and projects. What has been his favorite project so far? Read on to find out.

Marc is a backend developer, currently working for one of our major clients. He has been at Lamia since 2019. He studied computer science in Brussels and moved to Finland as soon as he completed his studies. He first started working in a chaotic startup before moving to Lamia. After paying his dues in the previous place, he joined Lamia with new-found confidence to stand up for himself and be realistic in his way of thinking.

When asked to describe his usual working day, Marc says he “usually” knows what he’s going to work on before starting the day, so there’s no hassle and time lost in trying to figure out what to do and when. Working in sprints makes this easy.

He starts his day by checking the latest gossip to see if anyone has flagged something urgent (making sure nothing broke while he was catching his Z’s). He usually works on a microservice, and updates or adds endpoints, which he calls “pretty faces to some other uglier services”. Marc finds it very pleasing to take a “weird, obscure service”, mask it, and look at a “nice swagger API documentation for a microservice” instead.

For most of his work, Marc codes in TypeScript, which he’s pretty comfortable with right now. For actual development he uses PhPStorm, and for trying things out, he uses Postman. "Then there are a whole host of tools for the actual building and development", he notes. "Right now we are using Bamboo for deployment, and Kubernetes and Google Cloud for running microservices. It’s really great to be using pretty standard tools because it makes it a lot easier to find stuff online."

While it’s difficult to choose just one great project, Marc gets reminiscent of the time when he created a credit card application site he worked on for over half a year. "Once it was done it was so pleasing to see it online, knowing that I was the one responsible for it. After I checked the logs over the next few days, I could see people actually applying for this credit card. There is something so nice about being able to point at something and say 'I did that'. Because of me, hundreds of people now have credit cards. That’s a weird thought."

There is something so nice about being able to point at something and say "I did that".

According to Marc, every single workplace in the world has people who don’t know what they are doing, and the people who do. The challenge is always to put the people that know what they are doing in charge, and the ones that don’t (yet) know, in positions where they get to learn. "I think Lamia really has that figured out. Expert knowledge seems to be in the right place, and I don't feel like I have to fight to get things done correctly, which is something I had to do a lot at previous companies. Here I can just focus on work", Marc concludes.

When asked about what he's looking forward to next at Lamia, Marc points to his own skills. “Honestly right now I just want to grow my skills and become more comfortable where I am. Luckily I get exposed to new challenges and get the opportunity to learn.”

“I am really looking forward to when normal office work is again doable. I prefer meeting people face to face, and just hanging out at the office is something I miss.” 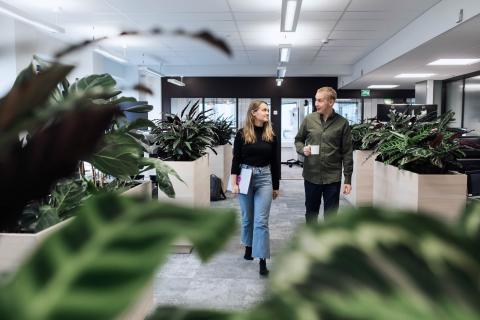